Cybercriminals spare no one and cyber threats loom on everyone’s head nowadays. Wondering which could be the best free antivirus for protecting you from cyber exploitation in the upcoming times?

At the dawn of this new decade, the cyber world has evolved with machine learning, artificial intelligence, and blockchain technology. In a similar way, the cybercriminals are upgrading their exploitation skills and techniques with the help of these emerging technologies.

Therefore, enhanced cybersecurity offered by an all-in-all best free antivirus is the only way to ensure safety and security from these advanced cyber threats. Don’t worry, we are here to offer you the best solutions for traversing safely through the cyber world, fraught with dangerous traps.

This article aims at providing you a thorough understanding of an efficient antivirus software, how it functions, and how it can offer protection against ransomware and other malicious programs.

At TechPout, we have tested some of the best free antiviruses of 2021 using a sample of 500 malware on a new Windows machine to determine which tools were able to detect and fix the maximum number of infections and issues.

Thereby, the tools which had resolved the highest number of issues were considered the most effective antiviruses for Windows computers. Here are the results:

Unravel more about these Windows antivirus applications to find out your best fit.

Let us look at some of the top-class antivirus solutions for Windows systems available in 2021.

As mentioned earlier, out of 500 samples, the products that were capable of fixing the highest number of infections and issues on a new Windows machine have been deemed as the most effective antivirus protection provider among 10 prominent antivirus tools.

Thereby, the product offerings have been elaborately explained in a decreasing order of performance. Let us, therefore, look at the first product – McAfee which resolved the highest number of issues out of 500 test samples.

McAfee is in the market for a long time and it has been providing internet security worldwide. This program is more than just an antivirus for the system. The most minimal plan supports a single device.

You also get an encrypted storage facility (128-bit encryption) with this tool. Let us find out the different features that this best antivirus for windows 10 offers.

Read More: List of Best Bluetooth Software for Windows 10 in 2021

This is another excellent antivirus protection from Kaspersky Labs that protects your essential files and backs up your data securely. The basic plan covers two user accounts at a time.

Being an award-winning antivirus tool, it offers top-notch privacy protection features to keep your system safe from all sorts of malware attacks.

Norton has been in business for quite a long time and offers multi-layered protection to your Windows PC. This is another best free antivirus application to shield your Windows PC from all kinds of cyber threats.

This tool offers antivirus, malware, anti-spyware, and ransomware protection along with plenty of other features. With top-quality virus definition, the Norton Security app is extremely easy-to-use.

With a heuristics engine, Avast Free Antivirus is a free antivirus software having multiple awards in its kitty. This product has received the Gold Award for precise malware detection and protection capability.

Avoid data breaches with the best free antivirus with numerous utilities and enjoy excellent built-in features. It’s easy to install and can be used effortlessly.

Ostensibly one of the best free antivirus software for all the complicated cyber threats, this antivirus protects you from viruses, infected email attachments and different sorts of malware.

BullGuard is a popular household name and is one of the best free antivirus hosting a number of services making it one of the best cybersecurity platforms. Simplified services, easy-to-use features, and a lot more is what this antivirus product offers. The basic plan supports a single device.

Panda Dome is the best free antivirus you can download for your system. Appealing UI, easy to install and use, this tool imparts a 100% virus detection ratio. It’s absolutely light on your system as everything is done from the cloud.

Product of an Australian based company, this effective antivirus for windows 10 offers you a range of services and facilities along with round the clock customer support to help you get rid of problems arising from the use of this antivirus. 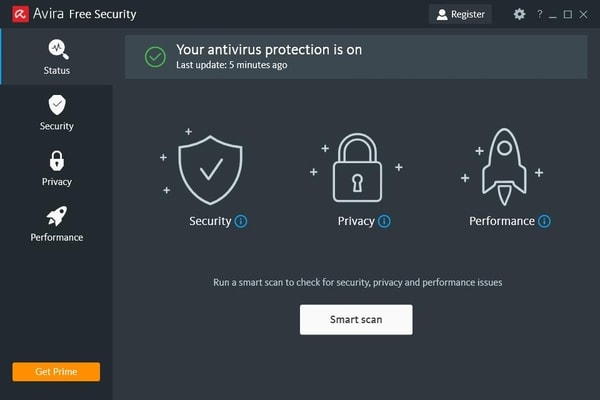 Avira is one of the best Kaspersky Antivirus alternatives that can offer you the best tools for protecting your PC. The antivirus offers the best free version which has tools to identify threats and remove them to some extent. Apart from this, the premium version is what gives you full protection tools.

The recent update has given a new look to the interface which is catchy yet easy to adapt. The free version of Avira apart from offering security tools offers VPN upto 1 GB for free. Other than this the software has various other add ons like Internet Security Plan or the Prime Plan, Pro version, and Plus Prime version. You can choose the version depending on your usage and requirements.

AVG Antivirus is great security software that offers the best tools for protecting the system. Though the software cannot be considered as the best lightweight antivirus, it can definitely help you in boosting performance and security. The antivirus software has two paid plans from which you can choose.

The plan includes AVG Internet Security that is compatible with every device. The price range of the software starts from $39.48 to $47.88. The difference in the price is because of the number of devices that can use the software. On the other hand, the software has an AVG premium ultimate package. In this plan, you will get VPN and AVG PC TuneUp as an addition. The plan costs $79.99 for 10 devices.

How Does Antivirus Work and Improve the Performance of the PC?

What Do You Understand by the Term Antivirus?

The easiest way to define an antivirus (also abbreviated to AV program) is to describe it as a computer program capable of detecting and removing malware if a system has been infected by a malware already.

Other than this, a good antivirus program also prevents malware attacks on a system with the help of advanced functionalities and features.

The free antivirus applications are responsible for keeping an eye on the web pages, apps, and files travelling over the network to your devices and monitoring the behavior of programs to flag suspicious ones.

Now, let me ask you another question.

What Do You Understand by the Term Malware?

Malware is an umbrella term for malicious software variants that can deliver its payload in various ways to infect and damage a system, steal its data, gain control over a system, and ultimately disrupt the services of the infected systems.

How Does an Antivirus Work?

The best antivirus software solution operates in the background to scan computers, servers, and mobile devices to detect threats in real-time, protect against the potential attacks as well as remove the existing infections. It performs the following functions:

Why is an Antivirus Important for Your Windows?

Did you know that there is about 60000 new malware created every day?

Where would your PC or your enterprise be without the support of an effective antivirus program?

Let’s take a look at the largest data breaches of recent times and the monetary losses caused due to several cybercrimes.

Malware nowadays reprogram quickly to avoid detection. With constant cyber attacks and ambushes, it becomes crucial to have a free antivirus protection that can defend you against the following:

Thus, the best free antivirus is going to maintain the overall health of your system and ensure the safety of your devices.

Traits of a commendable antivirus solution:

Q1. When was antivirus introduced?

The first computer virus of the world known as the “Creeper” virus was deleted in 1949 by a program known as “The Reaper” which was created by Ray Tomlinson.

However, in 1987, the first antivirus product for Atari ST computers was developed by Andreas Lüning and Kai Figge who established the German company G Data Software.

In the same year, the company released Ultimate Virus Killer (UVK) 2000. This was, thus, deemed as the first industry-standard virus killer for Atari ST and Atari Falcon.

Also, in 1987, the McAfee company was founded by John McAfee. He created and released the first version of VirusScan.

Meanwhile, the first version of the NOD antivirus was also released in the same year.

Hackers largely rely on malware and phishing scams to take control over a device and damage it. Therefore, an ideal antivirus protection capable of blocking zero-day malware attacks can protect your system against hacking effectively.

Q3. Can an antivirus detect trojans?

The clear-cut answer is, ‘Yes.’ An updated and powerful antivirus software can track the trojans and remove them from the computer.

A trojan horse sneaks into a system masquerading as a legitimate software that you download on your system without any realization.

Installing a modern antivirus software is your best solution to protect against keyloggers and other rootkit malware.

Keylogging is an activity-monitoring spyware that logs keystrokes without your awareness to access personal information such as login details, credit card information, passwords, etc.

The best antivirus software in the market uses a combination of signature-detection methods and behavioral techniques to catch keyloggers.

Yes, the best antivirus software is capable of detecting and removing malware that spies on your devices and system to rob sensitive information.

Yes, is the direct answer to this question.  A highly evolved antivirus application is capable of preventing multiple kinds of ransomware.

However, if ransomware has already infected a system and encrypted important files, then even for the best antivirus program it’s a bit challenging to stop it.

Antiviruses can detect known forms of ransomware based on its behavior but 2nd generation ransomware is a bit difficult to track down.

You can protect your Windows system with the best in class antivirus tool or with the usage of the Windows Security default app.

Q8. Can antivirus cause lag?

This is an old tale as advanced antivirus software is quite efficient and fast. However, it is true that all applications use CPU, so while scanning it is quite obvious that a detailed analysis of the system’s condition utilizes processing power but in an optimal way.

Ultimately it can be said that without a decent antivirus software, your system is like an open vault that can be damaged and looted within minutes.

Although Windows 10 systems have an in-built antivirus protection in the form of Windows Defender, yet it is not adequate in imparting ransomware protection and safety from advanced malware. It is also not effective against infiltrations via the phishing routes.

So, hopefully, you have now identified the best free antivirus for your Windows system that can provide the strongest defence against the emerging cyber threats. In addition to this, awareness regarding cyber scams and implementing the best practices of cybersecurity is indispensable to keep your system malware-free.