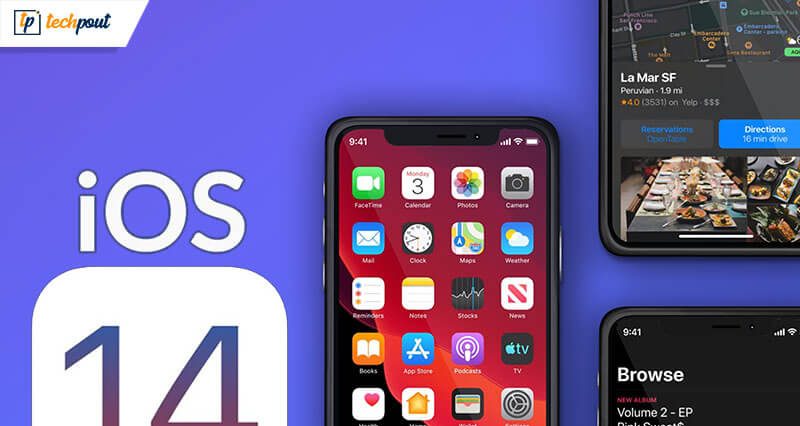 iOS 14 is in commotion these days and it is the next big thing since the iPhone. Although the official release date is yet to come, we all are waiting for this big update.

The release will show up somewhere around 13th and 19th September, this year. We all are very curious to know each and everything about the features, compatibility, rumors and futuristic new iPhones.

What would be the new possible features? Would it be compatible with the older iPhones and devices? Although, there are no official updates regarding the same, still, we are providing you with the latest news, rumors, and predictions of this new update.

Here we have thrown some light on the features of this update, rumors, specifications and features and almost everything about the new iOS 14.

Due to the millions of iPhone users worldwide, there is a huge commotion about the release date of iOS 14. Let us have a look at previous iOS release dates:

It seems that the iOS update release date is supposed to take place somewhere in September. According to the particular pattern of the release dates, we expect iOS 14 to be released somewhere between 13 to 19 September 2020.

The WWDC 2019, (WorldWide Developers Conference) that took place in San Hose, CA, announced a key-note describing the specifications of the iOS update and latest iPhones. Following this very path, we can expect the annual WWDC 2020 to take place somewhere in May.

Rumors say that the initial developer beta version will be released the very same day as the release of the update. iPhone users can expect the first public beta to arrive somewhere in the third week of June 2020.

It can be easily observed that Apple does not like to leave any of its devices behind if any iOS update is released. Although users having iPhones older than the iPhone 6S or iPhone SE will not get this update.

iPhone 6S and its successor iPhone 7 are the two cut-off links that will tell if the older phones will get iOS 14 updates. But this question remains a mystery: Will iPhone SE get the update?

We cannot make any conclusions about which model of iPhone will get the update and which won’t. Apple can change things in advance and customers can expect tons of surprises.

iPhone soft, which is a French website, claims to have spoken to an employee of Apple. The person claims that iOS 14 will be completely compatible with the list of iPhones that were compatible with iOS 13.

Let us have a look at the complete list of iOS 13 devices. These devices will be receiving the latest iOS 14 updates:

According to this above data, if the prediction is correct, it would mean that iPhone SE and iPhone 6S will support the update.

These are only rumors and nothing can be confirmed regarding the new plans of Apple.

Let us dive into the rumors and predictions and see what people really know, expect and talk about this highly anticipated iOS 14 updates.

1. iOS 14 is Rumored to Escort the 5G Connectivity

iOS 14 will change the face of 5G connectivity. This is the easiest guess one could possibly imagine. This can be the ultimate step, Apple will present to the world in 2020.

But this step won’t be possible with the older versions of iPhones with older bionic chips. It all depends on the bionic chipsets and their capability to process data at 5G speeds.

Another important factor will be the bandwidth range. Older iPhones working at a lower bandwidth not falling into the 5G range will become useless.

Only the latest iPhones with the latest chipsets will be able to process data at 5G speeds.

According to a Bloomberg report, Apple will be announcing the launch of AR glasses along with a 5G iPhone in 2020. This iPhone will probably be an iPhone 12.

These AR glasses will be used as a primary accessory to display text messages and will help with map navigation.

But before this happens, Apple would need a flagship killer app as the Google Glasses or Snapchat 2 spectacles can already do the same.

Amazon is also experimenting with Echo Frames to remove any flaws.

Given the time, Apple could bring forth a new beginning that will revolutionize the world of smart spectacles. iOS 14 should support it!

3. We Can Expect Foldable

Just like those foldable devices that have multiple screens to give users a perfect combination of power and dignity, a new update will bring along new devices with foldable glass screens.

Though this is just a rumor, Apple cannot just lag behind in the race of presenting its users the most distinguished devices the world has ever seen.

What We Expect From This Update:

Since the very first iPhone back in 2007, the world and technology have changed a lot. Our iPhones have also evolved over the decades. People used phones for calling, texting, and face timing.

But the present scenario speaks of the shift to emphasizing the way iPhones notify the users of any incoming calls or other notifications.

With the launch of new iPhones and other devices, people started to use iPhones in different ways. The phones were seen as a unit of entertainment.

Bionic chips were redefined to give hardcore gamers a much smoother experience and the dedicated movie lovers were given an immersive screen with no disturb modes.

This changed the entire way, users received the incoming notifications.

iOS 14 is rumored to change the notification settings where users will not be redirected from the current application to the black dial screen. Instead, they will see two dedicated icons. These icons will give them the freedom to receive or end the call just by touching the required icon.

If we talk about the older iOS versions, we can easily recall that the translucent drop-down menu with access to all the notifications was much better.

At present, notifications are displayed in the order they are delivered. This will not be any problem for the general public.

The current version of iOS comes with user-friendly manual notification grouping. This option converges all the notifications from a particular application and groups them all together.

3. Animoji Filters in The Camera App

Our question is, Why has Apple limited the Animoji filters only to the messaging app?

This new update is rumored to change the way users will use the Animoji filters in the camera app.

If this is made possible, then iPhone users would be able to use those attractive cartoon-ish Animoji filters in the camera app as well.

The current version of iOS works just fine for the whole week and wakes the users on the pre-set time. But what if the user is on a holiday or the next day happens to be a Sunday?

No one would want to wake up at 5:30 or 6 am in the morning after an overnight journey or a late-night party.

A tweak can be expected in the alarm setting that can ask the user whether he wants to change the alarm time or disable the alarm for someday or a few hours. This is a rumor but we can expect this helpful implementation

Comparing SIRI with other online assistants such as Google Alexa, Bixby and Google Assistant, we can conclude that SIRI has more room for improvement.

It can tell people jokes and read them stories. We expect SIRI to improve the way it communicates with people. There is a huge room to improve.

It is rumored that with this new update, iPhone users will be able to smartly compose emails.

Users will be able to insert links into text in the mail clients.

This will be very helpful for business people who use email clients on the go.

The latest version of iOS will definitely change the way iPhone users manage their devices and use them. iOS 14 will also mark the arrival of the iPhone 12.

Although we do not know much about the new features of the iPhone 12 or iOS 14 update, let us hope that we get everything we expect, given that Apple has never ceased to amaze us with the products.