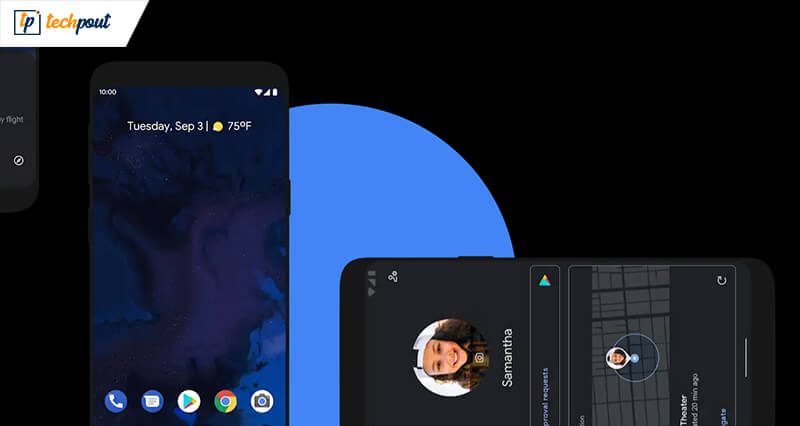 Filled with an array of advanced features, the new version of Android, Android 10 is finally released. Also known as Android Q, it brings with itself a bag full of useful goodies.

Desperate to know about them? Stay tuned to find out more about this updated version.

Android 10/Q has been officially released and is rolling out to Pixel devices initially. If you already own a Pixel phone, go to the System setting and upgrade your OS to Android 10.

Luckily, Android is not following its routine this time. Rather than giving a Dessert name (one like Android 1.5 Cupcake), it has kept it quite simple and just named it Android Q.

To give it a more mature and official name, Google has shifted to a simple numeric naming scheme. Well, it is still dull, but it still gives you a feeling of the official brand.

For the 1st time since 2014, Google has finally refreshed the overall look and feel of it’s Android device by adding a redesigned logo that looks like a green robot head.

Only the image is getting changed; the OS remains the same more or less. Keep reading further, to know more about Android Q,

The Iconic Back Button to Disappear, Finally

Google has finally bid farewell to its iconic navigation back button. The updated version features a fully-gesture based navigation method, which is being considered as a drastic shift.

Swipe up to go to Home, Swipe down to access the multitasking menu, and swipe right or left to go back.

Additionally, Android 10 will also allow you to switch back to the two-button array(featured initially in Android pie). However, it remains unclear if this feature is available on Pixel 4, Pixel 3 and 3a which are upgraded to Android Q will, however, be able to toggle between the navigation systems.

Luckily, the Dark Theme has made its place in Android Q. You can turn it “on and off “ in two different ways.

First, you can use the “Quick Settings” button to switch between the default Light Theme mode and the new Dark Mode.

Second, is by turning on the battery saver mode, which directly triggers the Dark Theme Mode on your phone to reduce brightness and strain on the eyes. Turning on the Dark mode will also save tons of battery life.

Android devices give us ample scope to customize our phones as per our choice and needs, and Android 10 adds even more to it.

With its new Theming option, you can change the accent color of your phone. It comes in a default iconic Pixel which can be modified to the following hues

The Live Caption functionality, is added to support deaf users. This incredible feature will add subtitles to all the videos that you are watching and does not require any internet connection. It comes as a built-in feature.

Google has laid heavy emphasis on privacy features in Android Q. Users will now have enhanced control over shared files and greater access to live locations. Additionally, notifications will be displayed on your screen based on their priority.

New functionality is known as “Scoped Storage” has also been added to Android 10. It can give users much-needed control over external storage usage by various apps.

It will also put restricted access to various device identifiers including serial numbers, IMEI, and many more.

When we talk about the Share menu in Android devices, it has always been a mess. No matter how proper its core functionality is, it keeps popping up on the main screen, and thankfully, Android Q has addressed this issue.

In a recent blog report Google cited that, Since the shortcuts are published in advance, the UI will get uploaded quickly with every launch.

Moreover, developers will also be able to create their customized share menu. That will share specific images and photo files in another app at a much faster speed.

This feature will provide better support to detect whenever an app has been stopped and when it is resumed. A folded display means that the app has been paused, whereas opening it means that it has been resumed again.

The Initial Rollout is Majorly for Pixel Devices

Apple Released the Latest 15.0.2 Version of the iOS and iPadOS for Bug F...

Create Your Own Avatar With New “Google Illustrations” Features for Goog...

Top 5 AirDroid Alternatives to Try in 2021