VPNs have increasingly grown popular over the years and there are plenty of dedicated VPN apps for Android phones and tablets that are easy to install and use. VPNs are used largely for their service to help users access apps that are restricted geographically and get to the content that is blocked. In this section, you will find 6 best VPN apps for Android smartphones that have come with important VPN features which you can’t ignore.

There are chances that you are new to the VPN services and want a secure web along with increased latency. Know that using any best VPN app for Android smartphone enhances flexibility on your device. Another point about VPN service that you should not skip is that it won’t have security against every threat. But you can always try the below-listed best Android VPN apps for all the right reasons. 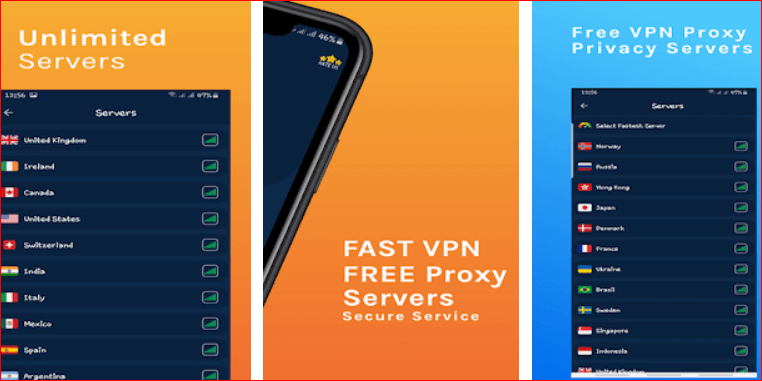 ExpressVPN is a VPN app that carries a great hold over handy features any best VPN app can service. First of all, it is user-friendly and simple enough to let users freely access the services. Then, it brings some advanced features to make a user’s time experience worthwhile. This neatly designed app comes with features like split tunneling and ability to detect any insecure network alongside the AES 256-bit encryption.

Apart from that, you can count on excellent speeds using this VPN service on your Android phone. On the top, there is freedom to access the geo-bloked content on major platforms like BBC iPlayer, Netflix, Amazon Prime and Hulu. ExpressVPN does come at an expensive cost but makes one of the best VPN apps for Android with tons of servers that are easily accessible. 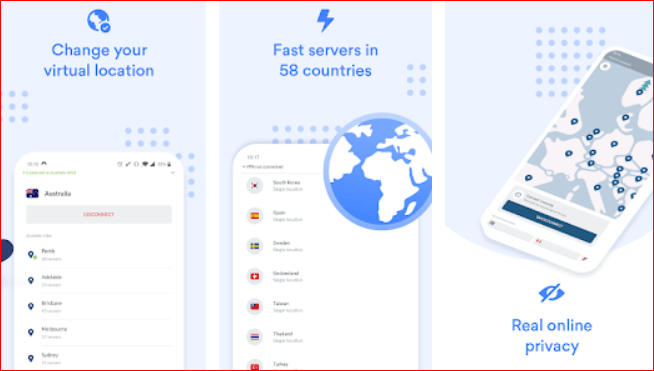 When it comes to the impressively popular VPN services, NordVPN has to be on the list. This app is a major highlight among the best VPN apps for Android phones. It comes with Double VPN functionality, which strengthens security by passing through the connection using two VPN servers. Besides, it features a strict no-lags policy.

While the NordVPN app is keen on servicing privacy and security, there are multiple other features that you just cannot miss. It features the ability to let users connect to NordVPN via Wi-Fi automatically along with the NordLynx protocol. There is no kill-switch in this one which may or may not affect you and this app comes with a good price for an amazing set of features it offers. 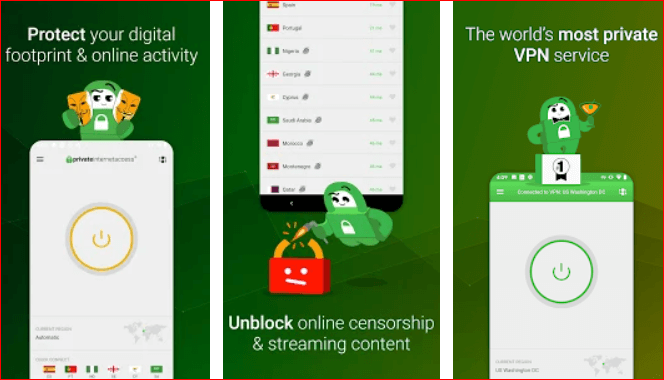 You will find a quick installation process and a simple usability in Private Internet Access VPN service. It is another best android VPN where users will find an abundance of useful features and handy settings. With an on and off button on the center of your screen, this service brings you proxy support.

Private Internet Access comes with an automatic connection capability whenever you join any VPN. Apart from that, this one allows you to enjoy a kill-switch that is a must for many users in any best VPN for Android. It also offers settings for the UDB and TCP protocol and has a custom encryption feature. 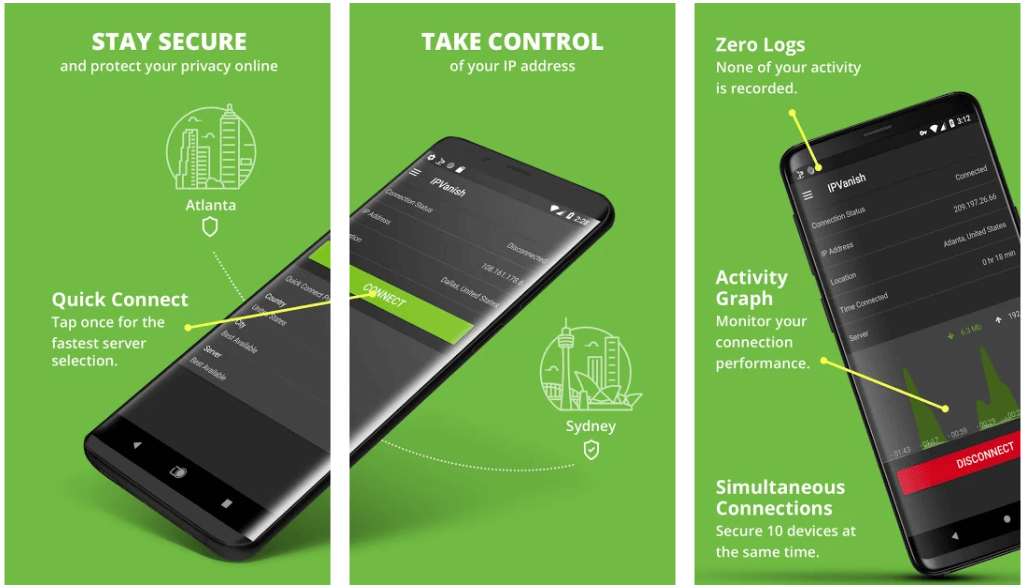 IPVanish is another best Android VPN app that has multiple important features along with the amazing kill-switch feature that enables the instant shutdown on internet connection whenever the VPN goes off. It offers users to view the status information including server name and IP address.

Read More: How To Setup & Use a VPN in Windows

This one, like any best VPN app out there, has a treat of incredibly fast downloading speeds. Apart from that, it comes with AES 256-bit encryption along with the OpenVPN protocol. You get to choose among three plans this app offers to access the features. 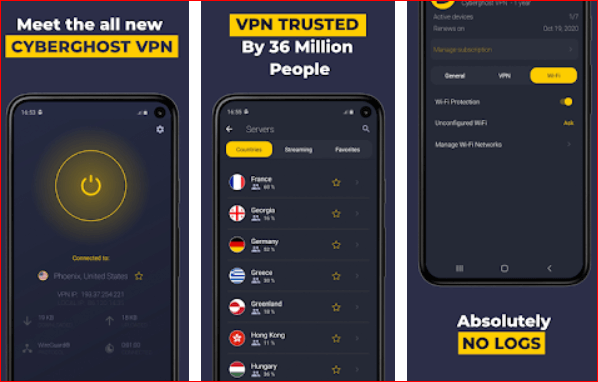 There are tons of features offered by Surfshark that make it count among the best VPN apps for Android phones. First things first, you will find this one amazingly simple in terms of interface which gives you the privilege to access its features including kill-switch seamlessly. CyberGhost comes with 256-bit encryption and has a zero-logs policy.

This VPN service enables users to access torrenting along with geo-restricted content on Netflix, BBC iPlayer, ESPN and some other streaming platforms. This VPN app does not let the complications creep in and ruin user-experience, thanks to its easy going operations and you can subscribe to this one in order to make sure you get the best of both worlds. 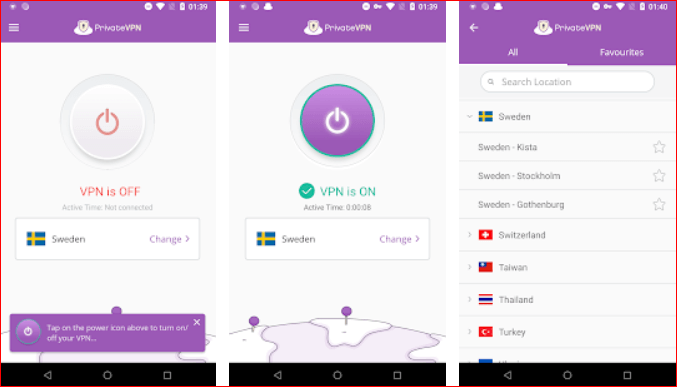 PrivateVPN has150 servers spread across 60 countries. It is one of the best Android VPNs out there with a set of most useful and handy features you would like to have in any great VPN service out there. PrivateVPN features a 256-bit encryption and it offers IPv6 and DNS leak protection.

Some of the users may find it quite useful that this VPN app doesn’t keep logs and that means it does not have any user data to pass on. Then, this VPN app lets users stream Netflix US, Hulu, BBC iPlayer and HBO GO. The sad part is that this one doesn’t have any kill-switch but if you are looking for a budget-friendly best VPN app for Android then this one is worth a try.

The price these best VPN apps for Android cost your wallet may be the reason you want to take your steps back and forget the idea of VPN or you may start looking for a cheaper or free VPN service. Know that, you will miss multiple useful offers in a free VPN service along with a risk of losing the security as well. If you want to make most of a VPN app then it is best to try the top-rated VPN services and make your call.

Let us know if you found what you were looking for in this article.