In the era of Netflix, Amazon Prime, Hulu and other such video streaming spots that are rising speedily, the smartphones still have those video files stored inside that users can care to open anytime. To support that, there surely is a built-in video player in devices but how do you say no to those third-party video players apps that make video streaming way cooler with their basic to advanced features? We all know that there are plenty of such apps that can be made use of in order to watch the videos on offline mode and leave no space for second thoughts. That is what caused this article to recall the 9 best video player apps for Android in 2021 for the coolest set of features including multiple file formats support and popular video codecs that definitely count. Let’s cut the talk short and see what’s out there.

Check out this list of best video player apps for your Android smartphone. Whether you have stopped by here to find any best HD video player app or simply the one with subtitle support (that counts a lot), here are the most popular video player apps that do more than just letting you stream videos. 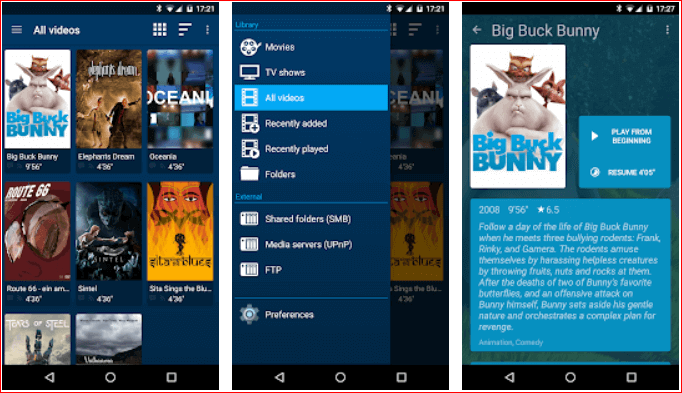 Archos counts among the best video player apps for Android that is actually popular for its feature-packed profile. First things first, this video player app supports almost all the video file formats that include MP4, MKV, AVI, FLV, WMV etc. in the list. And then, you get to enjoy the subtitle file formats including SRT, ASS and SUB and more. This app also supports external USB storage and NAS. Apart from the formats, one of the important features in this app is its interface that is designed with a modern profile and it also has easy controls alongside the ability to gather information from iMDb and other sites. So overall, there’s no harm in at least trying this app that provides most of its important features for free and if you’d like to go for the pro version, well even that is not so expensive. 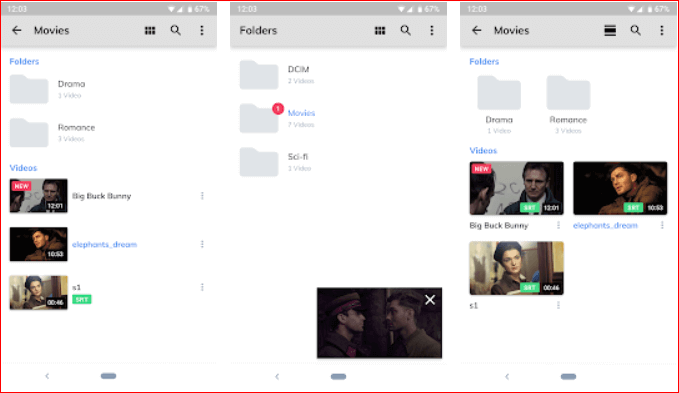 When it comes to the most popular video player apps for Android, MX Player is an app that has been in the talk for a long time and still continues to stand out as the best video player app for many users. This app had advanced long before any other video player app in terms of video file format support for most of the important formats. Besides, it features hardware accelerated playback and hardware decoding, probably some of the coolest features to have in a video player app. Then, this app offers you gesture controls, a lock feature for kids to let them stream videos without any interruption and yes, it supports subtitles and codec. If you expect more from a video player, this app brings additional plugins that you can certainly count on at some point. So yes, if you haven’t given this famous app, now is the time.

VLC is another name among the best video player apps for Android in 2020 that has been popular for a long run now and it is the one for its sleek features that make using this app worthwhile. Apart from the usual video file formats, you can stream the videos in DVD and ISOs and other such formats. Besides, you won’t feel an urge to use additional plugins in this app, thanks to its built-in codecs. You can also stream the videos in this app by simply putting in the URL. Then, this app offers support for other sorts of media including audio and it also features subtitle support. VLC is a hassle-free video app that also offers a beta version in case you want to make better use of its advanced profile. 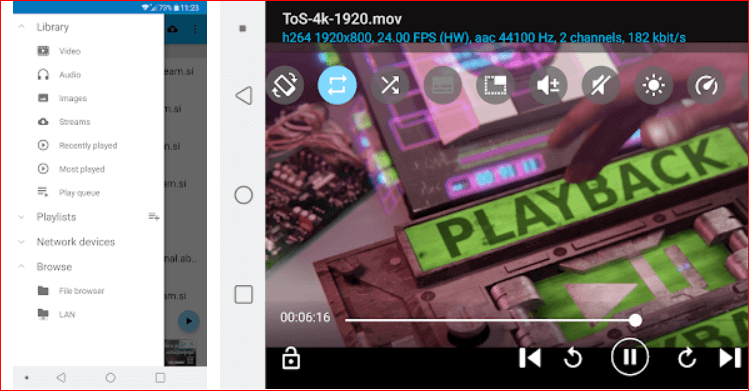 BSPlayer is one of the best video player apps for Android devices in the run for a long period. This popular app features the much-needed features that users can count on. To begin with, it brings support for subtitles and allows you to play content in compressed formats. It also features the ability to have a pop-up window, one of the useful features to look for. Apart from that, you get to enjoy some of the coolest features in this app including hardware accelerated playback, hardware decoding along with the ability to stream DLNA devices. BSPlayer can certainly be used for free but you may have to come across the ads in that. For a more smooth experience, you can use its full version that also offers additional plugins. 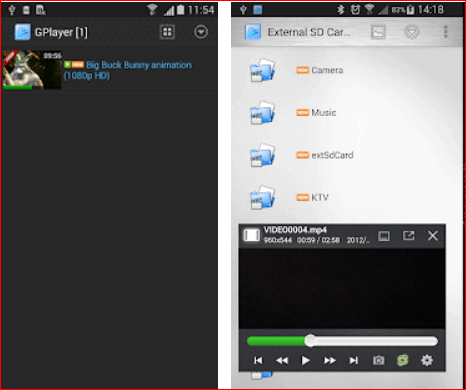 G Player is the next best video player app for Android that you can give a try to. First of all, this one comes forth for its simple interface, behaving quite friendly with the users that don’t ask for too much. And the fact that it features basic specs doesn’t stop it to provide you some advanced ones for free including the multi-window mode. The interesting part is that you get to personalize your files in this app and enjoy its ability to let you control the process. GPlayer offers support to the most important video file formats which counts as one of the essential features in any video player app. Apart from that, you have the privilege of viewing the videos in HD format which is what makes this coolheaded app worth a shot. 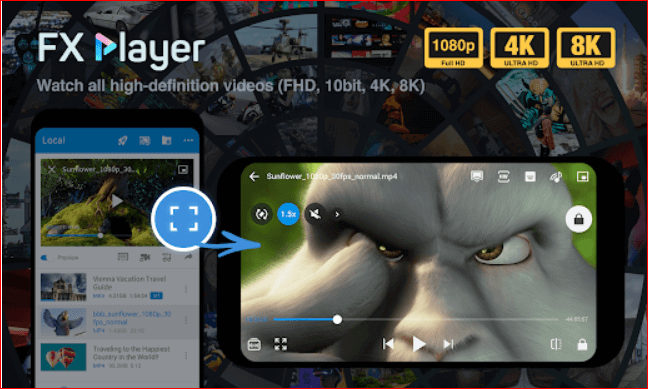 Next in line is FX Player that carries a set of extensive features, making one of the best video player apps for Android. This video player app supports multiple video (and audio) file formats alongside the subtitle support. Besides, you will certainly enjoy its ability to let you stream videos with 4K playback and the multi-language feature. This app also offers a pop-up player and hardware acceleration. On the top, FX delivers some of the coolest features such as network support for FTP, HTTP and SMB and it allows you to have a sense of control with its gestures control features. The deal breaker here may be its incorporation of recurring ads that you cannot actually get rid of due to lack of in-app purchases but overall, there’s no loss in checking this out.

If you can’t get enough of special features in any video player app then Plex may be the solution for you. It is possibly the best video player app for Android devices if you are looking for a way to stream video files on your computer using the server setup. So yes, you ultimately get a way to save up the space in your smartphone, not requiring to have the content lodged inside your phone. You can use its features for free but if you want to journey ahead on the feature-packed side, then there’s an offer to subscribe for its Plex VR. Overall, in terms of freeing yourself of any second thoughts regarding the storage, Plex is definitely a useful video player app for you. Let’s talk on basic terms. Here’s Video Player All Format (or call XPlayer) video player app for your Android device that has a say in offering you some of the most irresistible features keeping it real simple. It supports Chromecast and also claims to offer you most of the video codecs. Then, this app allows the streaming to night mode which may please some users. Apart from that, this video player brings a privacy folder and speed playback controls that makes it something to definitely try. But here’s something that may not attract you: there are chances of you ending up on ads at some point while using this app. However, you can incorporate the ad-free version and resolve that irritating issue. Now you know the reasons for which this one has made its way to this list. 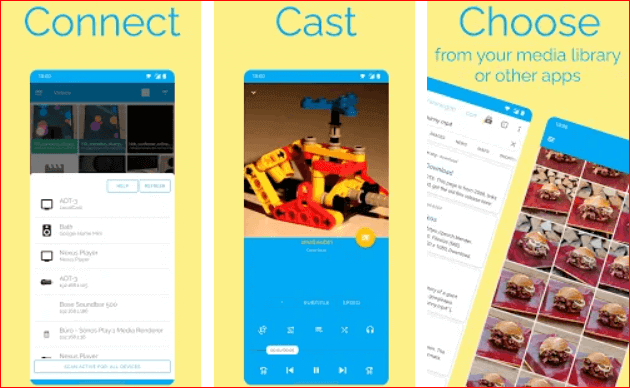 LocalCast may be the last one to appear on this list of best video player apps for Android but that doesn’t make it look any less special. Afterall, it allows you to stream media on Chromecast, Roku, Apple TV and Fire Stick from your device. Then, you can also stream files from Google Drive and Dropbox. This app boasts working on almost all DLNA devices which adds a solid point in the checklist. But the codec part is limited to Chromecast and you may or may not prefer this app because of that. But as we have mentioned already, there’s nothing so reasonable about its features to make it any less useful.

Now that you have gained more names for video player apps, let’s hope you be able to emanate the best from them. There were the paid and free video player apps for Android devices that are still as useful and young as ever. Which one’s your go-to? Did we just miss a solid name? Let us know everything by dropping it down on the comment section.