If you are looking for the best Nintendo DS emulator for Windows and Mac, then keep reading as we have mentioned some of the best just for you.

A gaming console helps in enhancing the gaming experience which you won’t find while using the keyboard or mouse. Out of the many gaming consoles we have here listed some best emulators for Nintendo DS. The reason we are sharing this particular model is that there are more than 150 million people who bought it and it was discontinued in 2013.

So if you are one of the 150 million users who are still looking for the best emulator options then keep reading to know each and every detail about the software.

Best Nintendo DS Emulators to Use in 2021

Here are some of the emulators that can help you use your Nintendo DS Emulator easily for any game.

The name can be tough to read but it is pronounced or read as No Cash GBA. This is one of the best Nintendo DS emulators. In the beginning, the emulator was named as Gameboy Advance emulator before it got support for Nintendo DS and DSi, later it got the name NO$GBA. The standard version for Windows has all the features that can help you run Mario, Pokemon, and other regular titles, however, the NO$GBA debug version for Windows has been designed for programmers.

The best part about these DS emulators for PC is that both the versions are available for free to use. The latest version of NO$GBA is v3.02 which was released in May 2020. The new update supports multiplayer mode for most of the GBA and DS ROMs.

The reason why this emulator is in the top position is that it has great compatibility with commercial DS ROMs. It also supports Nintendo DS homebrew. Using this emulator you can play various games like Pokemon Diamond on full screen without any interruption. It uses very few resources which is why it is a great pick. 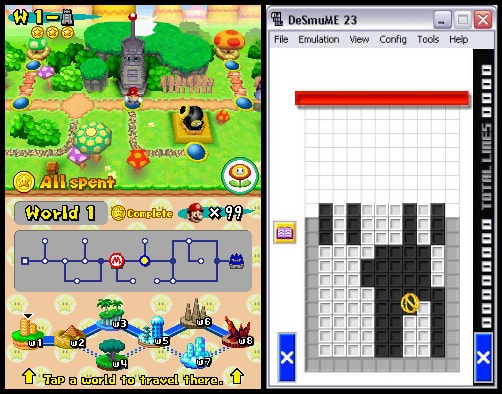 DeSmuME is another great Nintendo DS emulator which is open-source and free to use. This emulator is available for all the major OS including Mac, Linux, and Windows. It supports both 32-bit and 64-bit, apart from this it even supports graphics modification depending on the system you are using and its capabilities.

The emulator offers a cheat code manager, save slot, and USB controllers support. The save slot feature lets you continue from where you left off. For Windows devices, the emulator depends on the Microsoft UCRT DLLs that are in your system. If you are not sure if you have the DLL, then you can simply download it from the internet, there are many websites where you can find Microsoft UCRT DLLs. Windows users should even patch the latest version available for stable and better performance. 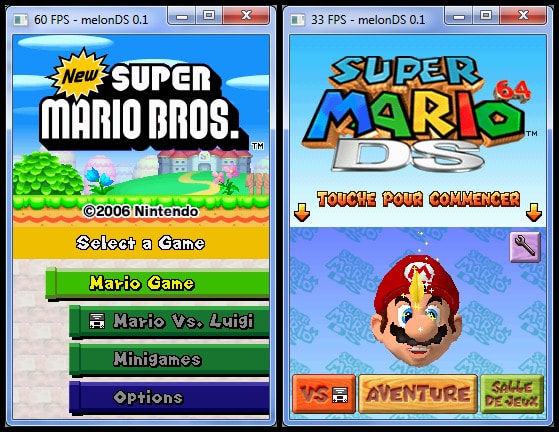 The next software on the list of best Nintendo DS emulators is MelonDS. It is also an open-source emulator that works on every Windows PC. The emulator is fast and offers accurate emulation for the Nintendo DS. Using the emulator you can run your favorite Pokemon and Mario games.

The features list of this emulator might really interest you. The list includes JIT recompiler, 3D upscaling, Joystick support, and OpenGL renderers like many features that help in fast emulation and better user experience.

Though only single-player gameplay is available, unlike others that offer multiplayer. Things to note, the emulator requires firmware and BIOS dumps for Nintendo DS because the developers do not offer Nintendo DSi titles. The same is with the Nintendo DSi titles you need to have the BIOS, NAND, and firmware. It offers an ad-free experience too, looking at all the features offered the emulator is one of the best Nintendo DS emulators for Mac and Windows. 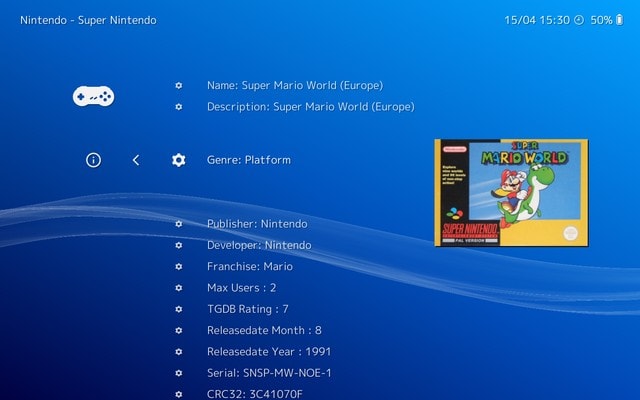 RetroArch is a great emulator which lets you play games, media players, and other applications. This is a free-to-use and open-source emulator which everyone can use easily. Using this you can play classic games on every computer without any issue. The interface as seen in the images is very simple and easy to navigate options.

Apart from the common features, it also has some unique features which you might like. The list of features includes netplay, 4K upscaling, rewinding, shaders, next frame response time, machine translation, and many others.

This DS emulator for PC is also available for mobile devices. It is available for all the latest versions of Mac, Windows Linux, Android, Raspberry Pi, and iOS devices. Other than this if you have an older version you can still use this emulator easily as it supports older versions too.  It can run on game consoles like 2DS, 3Ds, U, Switch, PSP, PS2, PS3, Wii, and others.

Yet another free and open-source emulator that works on most of the systems. It can be used for various gaming consoles like Game Boy, Genesis, Nintendo GS, and many others. If you have used Apple Music then you might find it a little similar to that. Using the emulator it is very easy to browse, add, and organize.

The layout has multiple screens that support cheat codes, shows saved states and many other options. All the games that you will play will be organized in a library for easy access. You can even create a separate collection using various titles from different consoles. The software smartly maps the controls of various devices including DualShock (3 and 4), PlayStation, Wiimote, and many others.

Ensata is a Nintendo-developed emulator that works perfectly with the Nintendo DS. It was developed as a debug target for the development of DS apps. The software emulates the ARM7 and ARM9 dual screen processors, using the mouse cursor as a touch screen. The leaked source codes have made this available to add commercial games.

The feature which makes it one of the best DS emulators for Windows is accurate rendering.  It aims to remove the gap between the two screens of the actual Nintendo DS console. The software doesn’t even require much from the PC to run. All you need to use Ensata is an Intel Pentium or above processor with a minimum of 256Mb of RAM and GPU with support of DirectX 9. You can use it in Windows 2000 and newer versions easily. 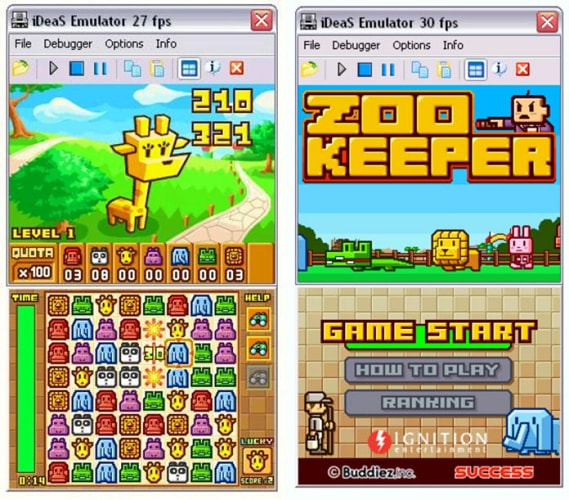 Next up is iDeas which is another great Nintendo DS emulator which is free to use. It can easily run several ROMs with support for major NDS functionalities. Inspired by the N64 emulator it uses the plugin system. Using this software you can run great games like ZooKeeper, Mario 64. Though you might witness some glitches while playing, there are a few that can be ignored.

Just like Ensata it also supports the dual-screen setup, using which you can easily take screenshots of both screens. Moreover, it also offers touchscreen supports that let you remap keys according to your preferences and ease.

The only negative point of this software is that the development of iDeas has been stopped, so the new games aren’t compatible with this Nintendo DS emulator for PC. But for the old games, it is one of the best options to go for. 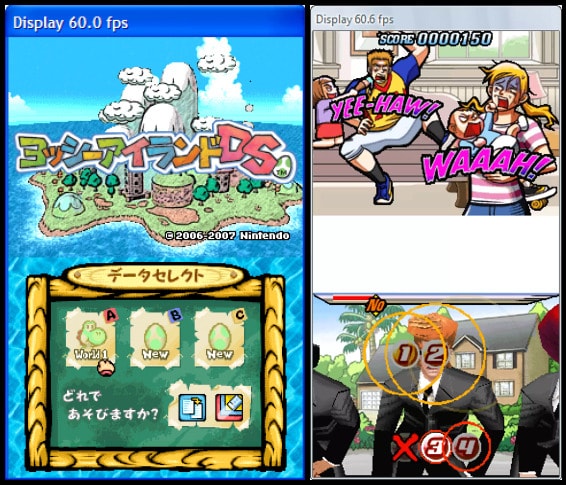 If you have a feeling that these Nintendo DS emulators cannot run the commercial games then you might be wrong because NeonDS is built for that purpose. The software offers fast rendering even with the old PCs which other emulators lack to offer. The rendering system is optimized to OpenGL 2.0 which offers freedom to record screens as well.

Though the emulator does not offer full compatibility it can still run on all major titles like Scribblenauts. Other than this there is another negative of this software, it hasn’t got new updates for a long time now which makes it incompatible with new games. Only if you are trying an emulator for better performance then you can try this DS emulator too. 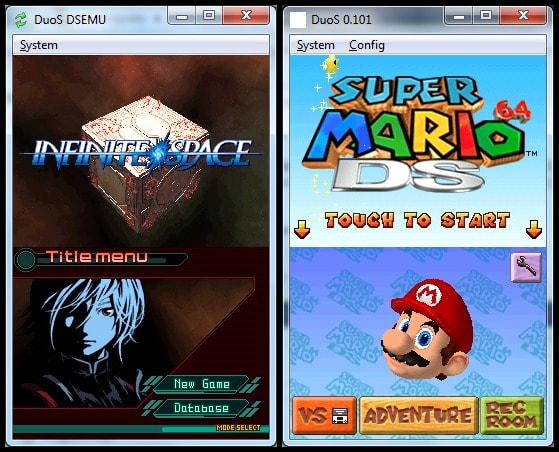 Just like NeonDS, this is also another abandoned project which might not be ideal if you are looking for new games. This emulator has both features GPU acceleration and dynamic recompiler with software renderer. This is a mixture of two emulators that we have listed above. It is a great software that offers quick processing and some of the greatest features.

The development of this software caused the downfall otherwise it would have been the best Nintendo DS emulator to use. The developers even planned to release new iDuos for DSi and Ds emulators for mobile devices, but unfortunately, none of them came into the market.  Above all, it is still a must-try software as it offers some of the features which might help you. 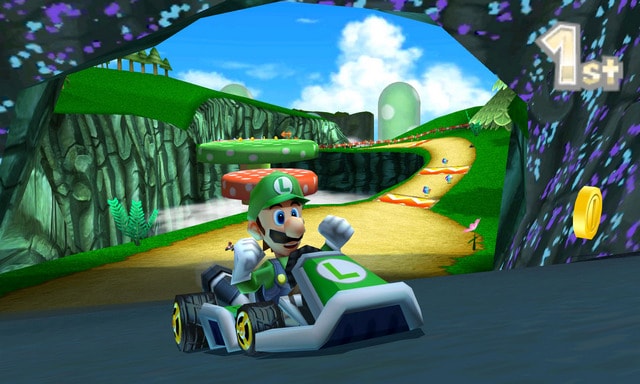 Citra is among the best DS emulators for PC that you can try. It is a free and open-source emulator which can be used by anyone easily. The software can run most of the titles including commercial 3DS on Windows, Linux, Mac, and Android. Using the emulator you can play games like Pokemon X/Y that require HLE audio and LLE audio.

However, unlike other software, this emulator might not work well in the old system as well as it works in new ones. It requires a powerful and fast processor to have a smooth run. You might even face issues with some games or apps as it will not load and only show a black screen. While the other compatible games run smooth and there you won’t face any issues. It supports WiFi but it doesn’t support Nintendo’s servers so if you want an emulator for the Nintendo server then you can skip this one. 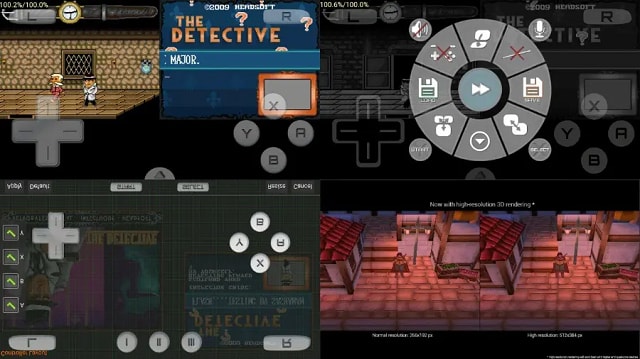 Drastic Ds emulator offers some of the best features which help it save a position on the list of Best Nintendo DS emulators. The software offers to save states, button mapping, controller support, and many other features. It can also increase the screen resolution if you wish to do that. For high-end smartphones, this one can be a great performer.

Though the screen of Nintendo DS is different from the mobile screen, to compensate for that the software offers as many as six different layouts. The layouts are single view, stacked view, keeping one screen shorter than the other, default view.  This is a paid software that charges $4.99, but looking at the features list the price is worth paying.

Last emulator on our list of best Nintendo DS emulators is Lemuroid. This is a great pick for Android users as it is completely free and ad-free too. Just like other emulators, it supports most of the systems like Atari 7800, Atari 2600, Atari Lynx, Super Nintendo, Nintendo, Game Boy, and others. It offers some of the important features like gamepad support, quick save, and others. It can connect easily to one gamepad.

Final Words on the List of Best Nintendo DS Emulators

Now that you have gone through the list of the best Nintendo DS emulators we hope that you have found the best emulator for you. The software we have mentioned can be used for various PCs and most of them are compatible with the older ones too. If you have any suggestions regarding the list then you can drop your suggestions in the comment section below.