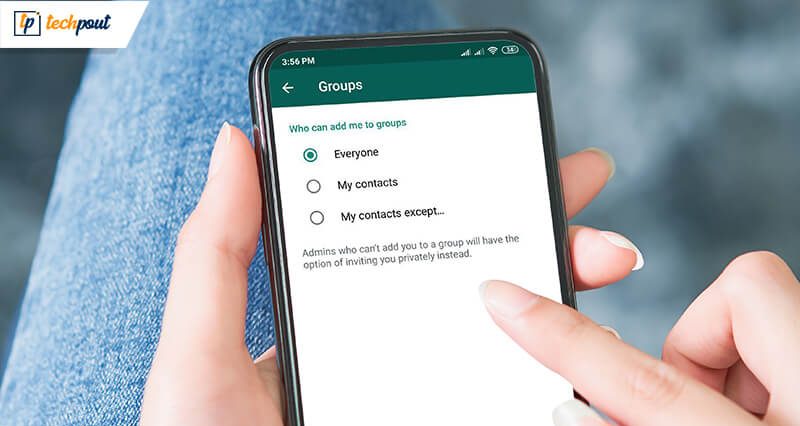 WhatsApp had earlier rolled out group privacy settings which let users gain control over who could add them to group conversations. Earlier, anybody could add us to some random groups which many times we didn’t wish to be part of.

This feature which was introduced earlier this year, gave users the convenience to select the “Nobody” option to prevent all contacts from adding them to random groups.

However, if a user had set up this option from the privacy settings previously, it would also prevent them from even being added to groups which they wanted to be part of.

The “Nobody” option is now replaced by a “My contacts Except” option. This alteration would now offer selectivity to users to tweak the contact list, who could add them to group chats as per the user’s will. This change was made, as the “Nobody” feature did not offer selectivity.

This feature can be accessed by navigating through the following path:

Once the app is updated, the “Nobody” option would now appear greyed out, and instead,  the blacklist option will appear.

After customizing the group privacy settings by selecting specific contacts, those contacts would now be able to add you to the groups created by them directly.

However, those contacts who were eliminated from the list would need to send you a request to join their groups which can be accepted or rejected as per your wish. There will be a timeline of three days to accept the invitation, post which it will expire.

The report of the new blacklist option in WhatsApp first came from WABetaInfo.

The group setting feature that also lets users see over the groups functioning and also select who can or cannot send messages, be the admin and much more remains unaltered with the latest update. WhatsApp continually updates its features and is currently working on developing the dark theme feature and ephemeral messaging. WhatsApp Web is also going to receive enhancement by the introduction of a new feature which is the consecutive voice message playback feature.

This new feature will help a user get multiple voice messages on their chatbox. Once the first voice message is played, all the other following voice messages will begin playing back to back automatically.

But the voice messages will not play in succession if any other message or media file arrives abruptly and creates disruption.

You can let us know your thoughts by adding your comments below about the blacklist feature in WhatsApp. The latest update is undoubtedly more convenient than the previously introduced feature. Also, keep following the space for some more exciting updates.