The top Best Voice Changer Apps For Android & iPhone listed in this article are some of the best sources to prank your friends and families & having fun as well.

If you’re not good at disguising your voice but love playing a prank on your friends and relatives, then a funny voice changer app is a must-have for you as it can help you generate tons of fantastic and funny sound effects for your voice.

A dedicated real-time call voice changer app comes in extremely handy for people who love to pull a prank on someone and get out of boring situations.

There is a multitude of free voice changer applications available online, making it extremely difficult to get your hands on the best one. To help you find your perfect partner in crime, we’ve handpicked a bunch of the best voice changer apps during a call for both Android and iPhone.

Let’s jump right into the world of voice-changing apps for Android.

Here we present our top choices for the best voice changer app for Android during call:

“A widely-used app with dozens of funny sound effects” 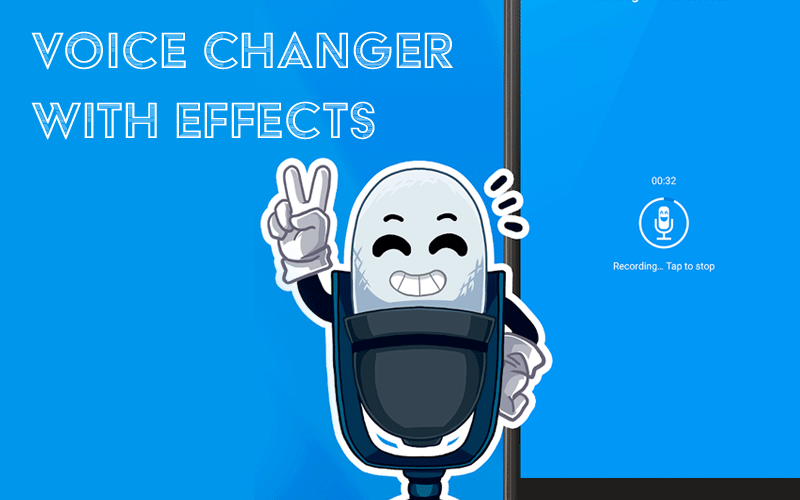 With more than 50 million users, this app has been rated as one of the world’s most popular voice-changing apps to make your voice high and funny during calls.

It allows users to modify their own voice with more than 40 voice effects. The modulated recordings can be shared on social media with an amusing image for some light-hearted fun.

Features of Voice Changer with Effects:

“A real-time voice changer for Android” 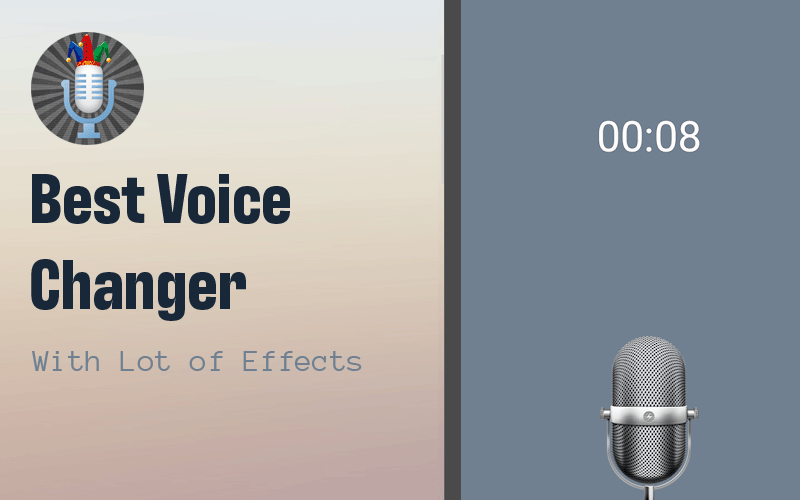 If you’re specifically looking for an app to easily change your voice during a phone call, then this best live voice changer app could be the perfect option for you.

The best thing about this app is that it’s completely free to use; allowing you to choose from a variety of vocal effects to make yourself sound like the God of Death, a Monster, an Alien, a Drunker, and more. 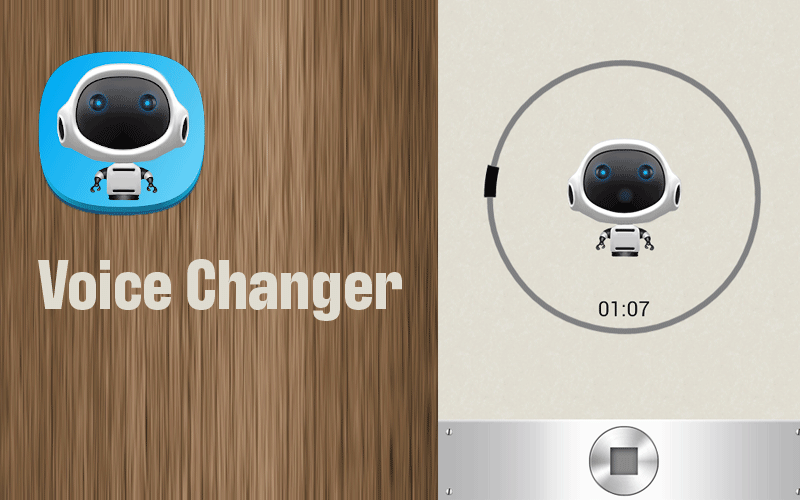 Developed by AndroidRock, it is a very simple and easy-to-use outgoing call voice changer app to change your voice during a real phone call by applying effects on the audio.

This free anime voice changer offers some of the most genuine robotic effects compared to all other robot voice changer apps to make your voice tone high, funny, deep, and scary.

You’ll be able to record your voice and sound like many different things, from a chipmunk to a devil.

“The best male to female voice changer for Android” 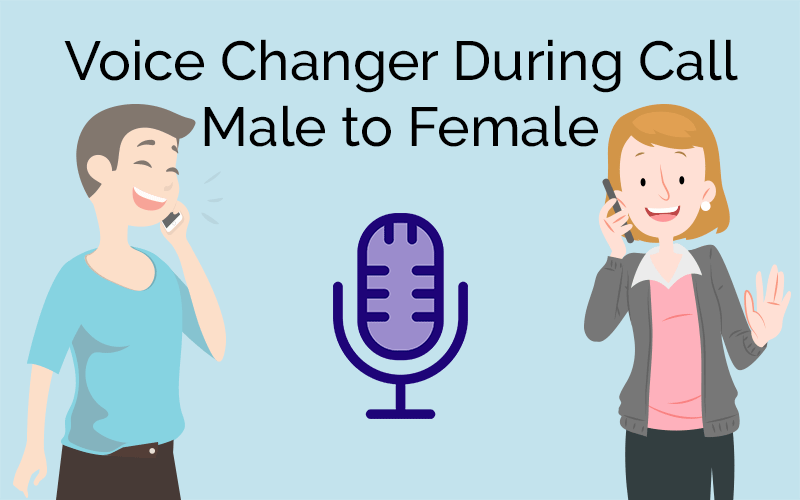 This is another voice-changing app with you that can change your voice from male to female during a call to make a funny prank and to have fun.

However, this app does not let you record calls as it’s just a live call voice changer for Android.

With this funny man-to-woman voice changer at your disposal, you can easily pull a prank on your friends, family, and loved ones, every time you acquire a new mobile number.

Features of Voice Changer During Call Male to Female 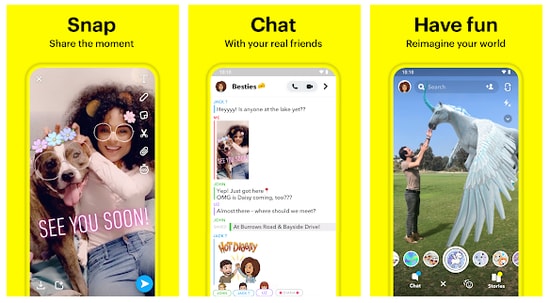 Snapchat is a popular multimedia messaging app but it offers an interesting ‘Snapchat voice changer’ feature that allows you to make your voice sound extremely weird and funny. You can record video snaps using a wide array of funny voice filters on Snapchat and share them with your friends via its live messaging feature.

All in all, the Snapchat voice changer app is indeed a great choice if you want to have a fun time with your best friends and family. 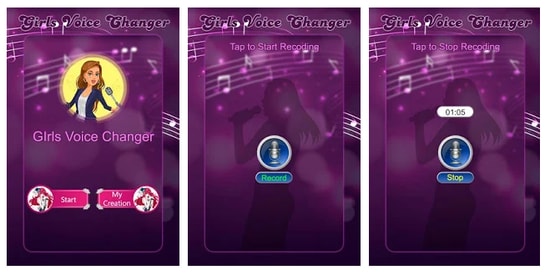 This is a simple female voice changer app that allows you to listen to your voice in different types of girl’s sound, including, old women, young lady, small baby, etc.

The only large problem with it is that it only lets you record your voice in a girl’s tone. Unlike other popular free voice changer apps on this list, there’s no option available to change your voice from male to female during a real-time phone conversation. 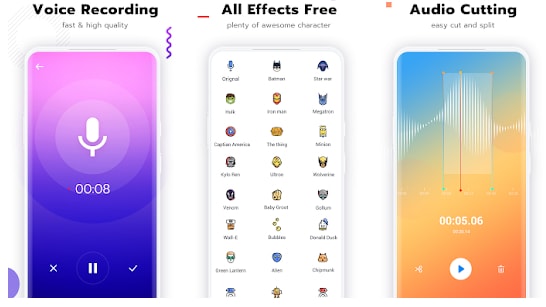 “Change your voice to superhero or alien with just one click”

Super Voice Editor, one of the best voice changer apps during calls, can easily change the voice to superhero, alien, man, woman, and child. With the list of options in superheroes, you can choose your favorite and change your voice easily. Record the audio and then choose the superhero to convert. The app is an mp3 cutter as well which will help in converting the desired part of the audio.

Other than just converting, the user can make a ringtone, edit audio, tune audio, and record voice. The app is available for Android users in the Google Play Store. It has been rated 4.5 by more than 72K users.

Here we present our top choices for the best iPhone app for changing voice during a call: 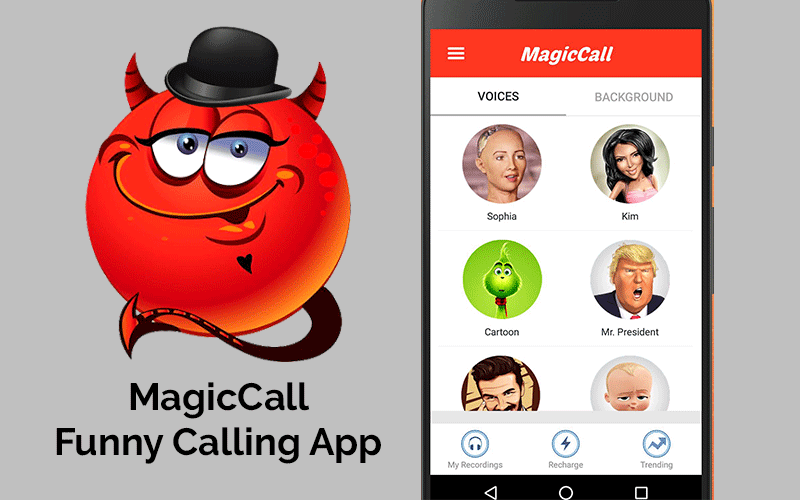 MagicCall is one of the most popular celebrity voice changer apps which allows you to make calls in different voices & play musical sounds in the background during calls.

Magic Call voice changer app during call offers a variety of different sounds and voices you can choose from, including happy birthday, traffic, romantic, male to female voice, cartoon, and more.

You can download Magic Call voice changer for free by clicking on the link given below.

“The best free voice changer during a call” 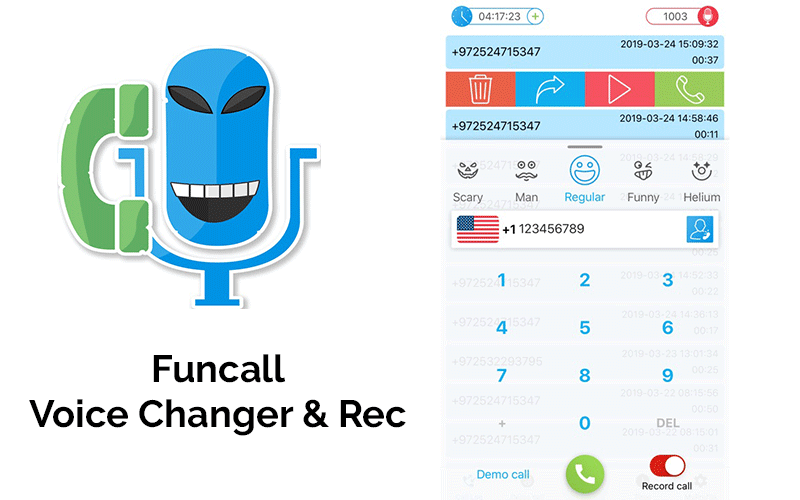 Funcall is a simple voice changer app with you can easily change your original voice tone & play funny recorded sounds during a real phone call.

You can apply numerous funny sound effects during a real-time conversation, including a werewolf, monkey, cat meow, scary zone, and dog bark. You can also use different voices to alter your voice in real-time during a call. The available voices include old lady voice changer, Helium balloon, baby voice changer, scary sound, etc. This massive range of voice effects makes Funcall one of the best voice changer apps for iPhones during the call. 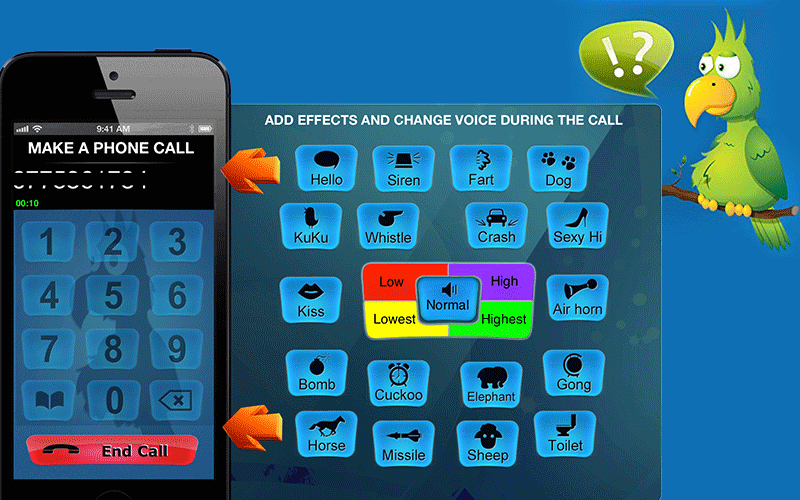 With more than 10 million downloads, Call Voice Changer IntCall has been rated as one of the best real-time voice changer apps to make your voice high and funny during a real phone conversation.

You can make phone calls funny by playing real-time sound effects like greetings, cartoon characters, birthday songs, and more. Its sound effects truly make it a deserving name as the best voice changer for iPhone during call.

The important point to note here is that users will require a strong Internet connection before using the app as it connects the phone calls through the Internet using a VOIP. 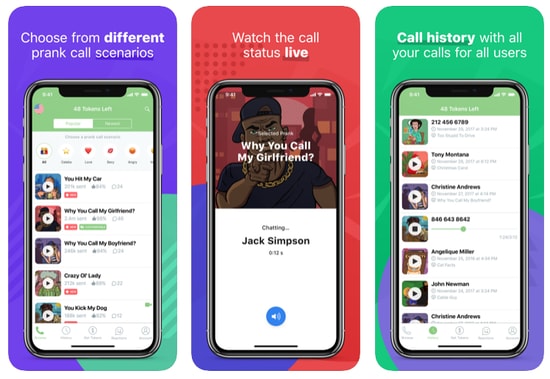 Prank Dial is one of the best free voice changer apps during calls to pull hilarious pranks with your friends. The application allows you to dial unlimited free prank calls with funny sounds and voice effects.

It gives you an option to choose from over 150+ different prank call scenarios to make fun of your friends. If you’re someone who loves to pull harmless but funny pranks to fool your friends, then you should install this excellent call voice converter app on your phone right away. 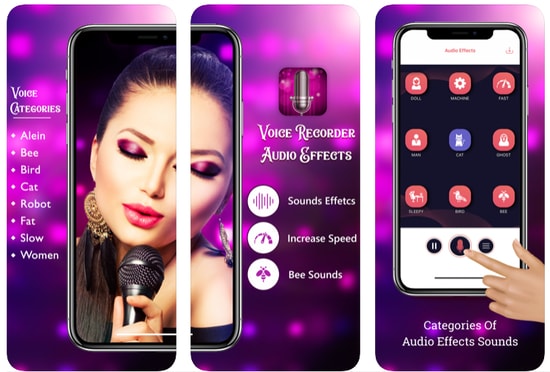 This is an easy-to-use free girl voice changer app that allows you to turn your voice into different kinds of girl tones. Users can use its amazing boy-to-girl voice changer to sound like a girl and share the funny recordings with their friends and family.

Something that can be considered a drawback is that it does not allow you to change your voice from male to female during a call. You only have the option to record your voice and share the modified results with your near and dear ones.

“An amazing app to change voice with endless effects”

The Voice Changer Plus offers more than 55 voice effects and background sound. The user can add more than one effect in the audio in different layers. Making fun voices is easy with this voice converter app.

The app has two versions including the paid and free versions. In the paid version the user can share the photo and have an ad-free experience. The app is great as users can record in the app, use the male-to-female voice changer during calls, and can also import audio clips to convert.

Features of Voice Changer Plus 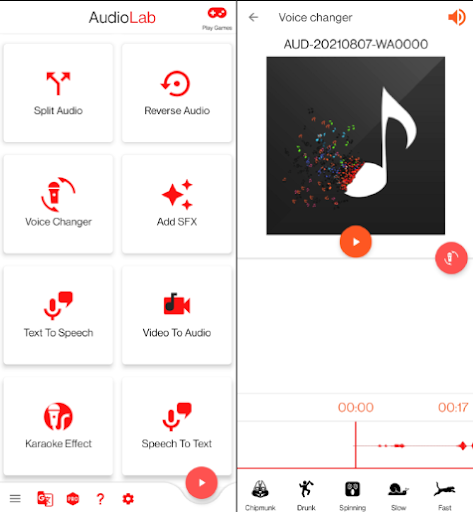 The next best voice changer app for Android is the audio lab. Apart from voice changing it allows users to trim, merge, convert, reverse, add SFX, text, captions, or split their audio. A minimal user interface with over 40 voice effects to choose from makes it beginner friendly.

But there are also a few drawbacks like multiple ad pop-ups. Also, it’s quite difficult to identify the edited files as they are stored in complex folder locations.

Q1. Can I change my background voice during a call?

The shortest answer to this question is ‘Yes’. You can easily change the sound of your background voice during a phone call using a simple voice changer app.

Q2. What is a voice changer in Snapchat?

‘Snapchat voice changer’ is a feature of Snapchat that allows you to turn your original voice into a funny and cool sound using a variety of voice filters such as alien, bear, cat, robot, and many more.

Q3. Which voice changer is best for Android?

Voice Changer with Effects is the best voice changer app for Android during calls in 2023.

Q4. Which is the best voice changer app for iPhone?

MagicCall and Funcall are the two most widely-used and the best free voice changer apps during calls for the iPhone.

Q5. What is the most realistic voice changer?

All the applications shared in this article are realistic voice changers. However, the following are our favorite apps.

Q6. How do you change your voice on Android?

You can change your voice on Android devices very easily with the help of any of the voice changer apps provided above. You may have a look at the features of the tools first and then download the ones best suited.

Q7. Is there any voice-changing app?

Yes, there are tons of voice-changing apps available on the internet for Android and iOS devices. However, if you want the best ones only, you can have a look at the top ones provided above.

Q8. Is there a real-time voice changer for Android?

Yes, the Voice Changer app and Voice Changer During Call Male to Female app provided above are real-time voice changers for Android.

Q9. What is the best girl voice changer?

Our aforementioned list contains some of the best voice changer apps during calls for Android and iPhone on the basis of ease and popularity.

You can get all of these voice-changing apps on the Google Play and iTunes App Store for free; pick your favorite and start pranking your friends in a real phone call.